Who can fight Android trojans? Not Google, it seems

The amount of malware targeting Android (android trojans) is still growing fast, and Google has promised to crack down.

Back in February of this year, Google announced it was hardening its stance on Android security, unveiling an app-scanner (codenamed Bouncer) to weed out malware and android trojans uploaded to Android Market (now Google Play) through automatic scanning. Since then, Google has taken more steps to protect Android users: it acquired VirusTotal back in September and in Android 4.2 Jelly Bean introduced an optional app verification feature that enables users to identify dangerous and potentially-dangerous apps on their devices, even if they downloaded them from the Web or got them from an app store other than Google Play.

How have Google’s efforts to combat Android malware been working out? Perhaps not so well. Security researchers were quickly able to analyze how Bouncer operated and find easy ways to circumvent Google Play’s automated scanning – techniques publicly available now to malware authors if they hadn’t managed to think of them on their own. Further, Xuxian Jiang of North Carolina State University has published an assessment of Jelly Bean’s app verification capability. The results? Google’s app verification service identified just over 15 percent of malware samples thrown at it from the Android Malware Genome Project What do these findings mean? Do Android users need to immediately run out and install antivirus and security software on their devices? Or do only people who engage in “risky” behavior with their phones or tablets need to be worried? How bad is it? 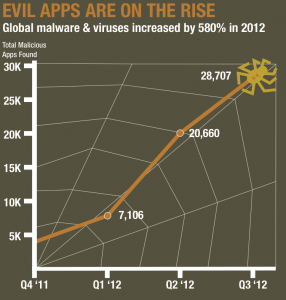